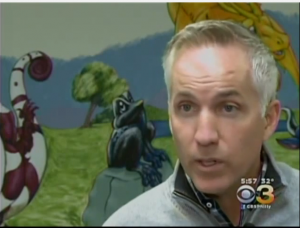 PHILADELPHIA (CBS) – A Philly non-profit is in the running for a big gift that could help hundreds of families dealing with a medical crisis.

The charity has distributed more than $6 million for thousands of families. We met two of them at St. Christopher’s Hospital for Children in Philadelphia.

Cayley Colon had just turned five when she was diagnosed with cancer of the kidneys. Her mother, Reina Suarez, took time off work, but bills don’t take a break. “My car, how I’m going to pay my car insurance?” Reina said. “Without my car insurance, I wouldn’t be able to get back and forth to work.”

“That means they have no income coming in, and they fall behind financially,” said real estate developer Chris McElwee.

In 1996, he founded the non-profit Michael’s Way in Philadelphia. The charity pays an average of $3,000 in non-medical bills for needy families facing cancer. “Michael’s Way has probably helped at least 80 percent of our families,” said St. Christopher’s oncology social worker Robin Capecci. The families helped include the family of four-year-old Zander, who has leukemia. Zander’s mother, Sandy Casanova, said Michael’s Way helped with “my mortgage. They have helped me with my car payments. They have helped me with some of the utility bills. So if it wasn’t for them, you know…”

Chris was inspired by his late brother Michael, a carpenter who died of cancer in 1983. “And even during that time, he was always helping others,” Chris said. “It was just his way. And that’s Michael’s Way.”

“Without Michael’s Way, I wouldn’t know where we’d be at today,” Reina said.

Michael’s Way raises money through t-shirt sales, donations and fundraisers and now is a finalist for a NASCAR charity contest. The most votes wins. “And if we win, we win $100,000 for our charity, and $100,000 goes a long way to help some families,” Chris said.

Chris takes no salary. Neither does anyone else at the charity, so they can help as many families as they can. The NASCAR voting ends December 4, 2014. If you want to vote for Chris McElwee and Michael’s Way, visit: www.nascar.com/award