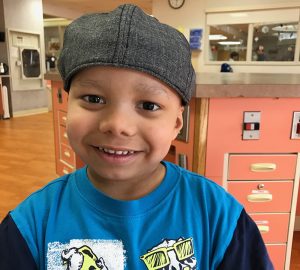 Matthew has big brown eyes, a loud mouth, fierce personality and his shark teeth smile is the sunshine in his mother’s morning. He loves to cuddle and enjoys buttering you up to get what he wants. He is a four year old boy that suffers perfectly from middle child syndrome.  He tries to out due his big brother and steals attention from his baby sister. Matthew also suffers from Nodular Lymphocyte Predominant Hodgkin Lymphoma.

On a very hot Thursday afternoon in July of 2015, Matthew’s mother was trying to get him in the bath. He told his mother that he could not get undressed because his arm hadn’t worked in days. After undressing him, she noticed something sticking out of his arm pit. She rushed him to St. Christopher’s Hospital. That evening changed their lives forever. Matthew was put through all types of scans, tests, and blood work to determine that he had cancer. He got started on 4 rounds of chemotherapy right away.

As of now, Matthew is healed and cancer free! He tells his mother that he wants to be a police officer when he grows up so he can eat all the donuts he wants. His mother believes he was given another chance at life because he has a purpose. We can’t wait to see him grow and become successful!