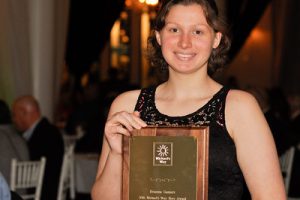 In September of 2014, Brianna was a 14 year old freshman in high school just four days into the new school year when she was diagnosed with Bilineage Leukemia. For the next year she spent more time in the hospital than out because of reactions she was having to the treatment. She suffered a lung infection that had her on antibiotics for 9 months, pericardial effusion, high bilirubin, elevated kidney function, a very bad case of mucositis, neuropathy, she was fed through an NG tube for a year, she was hospitalized for a nutritional crisis, she had a septic hip and avascular necrosis which eventually led to a hip replacement, ankle surgery and a knee replacement.

Through all of it Brianna has been able to maintain a 3.7 GPA in school and when she returned to school as a sophomore she was nominated by her teachers as Student of the Month. She will be graduating with her class in 2018. Brianna is also very involved in school clubs such as the Key Club, Interact Club, Hoofprints (the school newspaper), and she created and is president of Club Cure- a club that raises awareness about cancer. And if she wasn’t busy enough, because she will never be able to play sports again, Brianna has taken on the role of manager in Field Hockey. Brianna is also heavily involved in the Leukemia & Lymphoma Society of NJ and has been named their Honored Hero in 2014, Skipper of the Year in 2015, Honored Hero (again) in 2016 and she is currently campaigning to be Student of the Year in 2017 with the goal to raise $50K for cancer research.

Having cancer has changed her life and taught her to expect the unexpected and live in the moment. She says she hopes to see the day that cancer is cured!