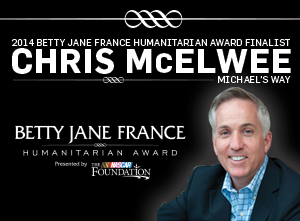 Chris McElwee, Founder of Michael’s Way has been nominated by NASCAR as one of four finalists for the Betty Jane France Humanitarian Award. If Chris and Michael’s Way receive enough votes, we will win $100,000 to help more families with children fighting cancer pay their bills. We need your help to spread the word to earn enough votes to win this incredible award! Please read on to find out more about Michael’s Way and how your votes can change a child’s life!

Yo Philly: Vote for Michael’s Way, and Help Families with Children Fighting Cancer!

Chris McElwee, founder of Michael’s Way — a Philadelphia-based charity which helps families with children fighting cancer, has been selected as a national finalist for The NASCAR Foundation’s 2014 Betty Jane France Humanitarian Award (BJFHAward), which comes with a $100,000 award if it receives the highest number of online votes. Three other charities are in contention for the prize.

Michael’s Way was established in 1996 by McElwee in memory of his late brother, Michael, who lost his battle with leukemia. The mission of Michael’s Way is to improve the lives of children with pediatric cancer and support their parents struggling under the financial strain that often comes with such a devastating diagnosis.

What makes Michael’s Way different? Unlike many other non-profit groups, 100% of all donations go directly to the families of children with cancer. Michael’s Way helps pay the non-medical costs associated with caring for a child with cancer: household bills, rent or mortgage, utility bills, transportation, food, etc.

Since its inception, Michael’s Way has raised and distributed more than $6 million to lessen the financial hardships of hundreds of families in the Philadelphia area whose children are battling cancer. 100% of money raised goes directly to the families, NOT TO OVERHEAD!

Chris McElewee has also been instrumental in forging a partnership between Michael’s Way and Flyers Charities.  His efforts have resulted in the two charities working together to create Building Hope for Kids, which has renovated the homes of children with cancer, ensuring they live in a safe and comfortable environment. In addition, McElwee is the Vice Chairman of the Snider Hockey Foundation Board of Directors. He is the co-founder and co-chair of the Philadelphia Flyers Celebrity Golf Invitational, which has raised more than $4 million to directly support the 3,000 boys and girls who take part in the Ed Snider Youth Hockey Foundation programs.

The award honors the unwavering commitment that The NASCAR Foundation’s Chairwoman, Betty Jane France, has demonstrated through philanthropy and community service. The annual award is presented to a dedicated NASCAR fan that has made a profound impact on the lives of children in his or her local community.

Here’s how you can help make Michael’s Way a winner: Go to http://www.NASCAR.com/award and vote for Chris McElwee. If Michael’s Way wins, it means a $100,000 shot in the arm for a local charity that does so much to ease the financial burden of families with children fighting cancer, so that the families can concentrate on the real battle — saving their child’s life.

Voting ends at 11:59 p.m. ET on December 4, 2014. The winner will be announced on December 5th in Las Vegas, NV during the NASCAR Sprint Cup Series Awards show, a nationally televised event at Wynn Las Vegas.