My Weekend at Martinsville 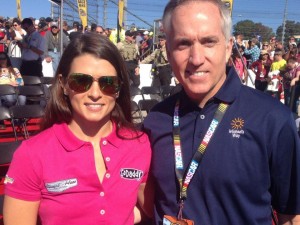 My Weekend at Martinsville

This past weekend, I was honored to be NASCAR’s guest at Martinsville Raceway during one of the final Sprint Cup Chase races of the season. This has been one of the craziest weekends for Michael’s Way since Pocono Raceway nominated me as a finalist for NASCAR’s Betty Jane France Humanitarian Award on October 1st. 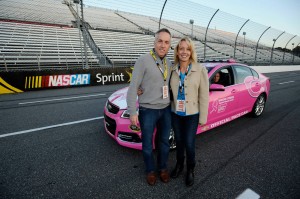 The most wonderful part of the weekend was undoubtedly getting the opportunity  to meet so many supportive folks involved with NASCAR, from the fans to current and former drivers like Richard Petty, Clint Bowyer, Danica Patrick and Rusty Wallace. The Chase Points Leader, Jeff Gordon, was nice enough to sign a Harley Davidson for Michael’s Way. Even fan favorite and race winner Dale Earnhardt Jr. took the time to take a photo with me, which I like to think gave him a little extra inspiration! 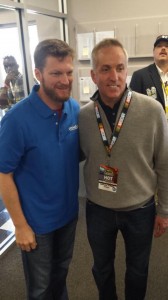 I was also interviewed by NASCAR and Sirius Radio, which provided me with the vital opportunity to explain Michael’s Way’s mission of paying the non-medical bills of families with kids fighting cancer. NASCAR’s graciousness was unbelievable, especially because I got the chance to ride in the official pace car, which is every NASCAR fan’s dream.

NASCAR also introduced me and Michael’s Way during driver introductions, allowed me to sit in at press conferences and driver meet and greets, welcomed me to the NASCAR suite to watch the race with everyone in the organization, and even took me down to the Winner’s Circle to see Dale Earnhardt Jr. enjoy his fourth win of the season.

While all of these experiences were unbelievable, the most important aspect of this incredible trip was the sheer amount of exposure Michael’s Way received. It was heartwarming to see just how gracious and caring about our charity everyone involved with NASCAR is. NASCAR has some of the most devoted fans in the world, and with them on our side voting for Michael’s Way, I think we’ve got a great shot to win this $100K award and help a lot more amazing families in need. Thank you, NASCAR!!!