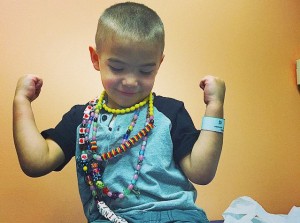 We don’t need to tell you that Dominic’s smile is contagious because you can see it for yourself. He has carried that smile through his clinic visits, radiation and physical therapy appointments. Dominic loves people and loves attention from anyone who will give it to him. He can befriend everyone and that is why the volunteers at the Philadelphia Ronald McDonald House have given him the nickname, “The Mayor”.

Dominic is one in a million. His battle started at a very young age when he was paralyzed before his 3rd birthday due to a very rare disease called Transverse Myelitis. Dominic relearned how to do everything from moving his fingers to finally walking! Only 1/3 of people with this disease regain the ability to walk again. After doing routine MRIs, they found Dominic’s brain cancer. On August 26, 2014, he was diagnosed with an Inoperable Brain Stem Fibrillary Astrocytoma. His brain tumor is inoperable because of its location in his brain stem and they were told chemotherapy would have little to no effect. He was treated at Children’s Hospital of Philadelphia with 30 days of Proton Therapy Radiation which successfully shrank his tumor. Dominic recently had his 9 month post radiation MRI and thankfully, results showed no tumor growth!

Big brother Dominic now has more time to play “I Spy” and “Hide and Seek” with his younger sister and brother. His mother, Ashley, dreams of a long and healthy life for Dominic filled with nothing but smiles and laughter. He continues to smile through tough times and that will inspire many!