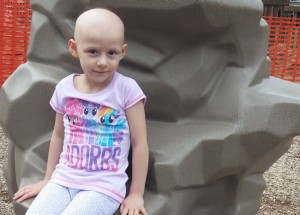 This little Emily may be a young, care free toddler but she is much wiser than her years. Emily is a very outgoing and energetic girl who dreams to be a Rock Star or Actress on TV! When she was 3 years old, her energy started to decline and it showed. She became lethargic and ran fever after fever through the month of April 2014. Emily would complain that walking was too hard or her legs hurt. Her cancer first presented as a virus. After blood tests, she went from the pediatrician to the ER to the infectious disease floor of St. Christopher’s Hospital and all within one day.

Emily has been diagnosed with an extremely rare childhood cancer called Pleuropulmonary Blastoma, located in the lungs. Her treatment consists of surgery to remove her tumor followed by chemotherapy. Surgery was successful and she is now half way through her chemotherapy.

Her Mom says she dreams about the things she has taken for granted like Emily starting Kindergarten next year, holidays with friends and family, high school prom, a wedding. The greatest hope right now is total remission with no reoccurrence. Remember little Emily when she becomes a famous actress in Hollywood!